Once again, Veritas Publishing House took on a gap-filling task, namely, the publishing of the newly revised Karoli Bible.  The name of Joseph Baranyi is well known among Hungarian Bible readers and Bible scholars. The Baranyi Concordance and the Karoli Study Bible are such monumental accomplishments that few can compare with them in the Hungarian Christian book publishing arena.  Promoting a better understanding of the Bible is the distinctive characteristic of this newly revised Karoli translation. The Karoli Bible is the most popular Bible translation in the Hungarian language.  But Karoli and his colleagues published their translation in 1590.  Several revisions appeared during the next few centuries, the most recent being in 1908.  Although the Bible was and is the same as it has always been, the Hungarian language itself has changed a great deal.  And without a revision, it had become increasingly difficult to understand the archaic text, resulting in fewer and fewer readers of the Holy Scriptures.  Veritas’ primary goal was to create a text that is more understandable and authentic, while still retaining the flavor of the old Karoli translation.  It is meritorious that they corrected the mistakes of previous editions, and occasionally they did not mind “returning” to the original Karoli text, where later revisions changed the text without showing valid reasons.  At the same time, Veritas’ efforts to stay as true to the meaning of the original Hebrew or Greek text as possible are very evident.  Without doubt, they can hold their heads high as their work takes its place in line among the other Hungarian Bible translations, since it was accomplished with such great professionalism, devoted hard work which took even the smallest details into consideration, and undoubtedly by continuously seeking God’s help.

Interview with Joseph by Dennis Ford, published in The Connection Magazine of Trans World Radio

Dennis - Tell me how, when, and where did you and your family become a part of TWR? Joseph - It was in 1972 when the inner conviction became so overwhelming in our lives that my wife and I decided to leave everything behind in our native land of Hungary, take our two baby daughters with us and go to Monte Carlo to become missionaries with TWR. I had been supplying broadcasting material to TWR for years and I wanted to do this as a full-time ministry. However, getting to Monte Carlo was everything but easy. We had to go through one country after another without legal papers, surviving a terrible car accident and finally with divine intervention making our way to Monte Carlo. It was only later that we found out that the mission staff at TWR, without knowing anything about us personally or about our decision, were praying faithfully for months and months for an additional broadcaster to join their Hungarian Department.

Dennis - What was your ministry with TWR and how long did you serve? Joseph - For twenty years we were part of TWR as Hungarian program producers. Starting out, I was responsible for a weekly youth program. Soon after additional programs were added to the list, like Euroclub for the intellectually minded, counseling programs, evangelistic programs, Bible teaching programs, and later on daily magazine type of programs designed to reach the younger population of Hungary. It was the most fulfilling experience for me to be involved in this ministry.

Dennis - What brought about the change from serving with TWR and where did God lead you? Joseph - The dramatic political changes in Europe in 1989-1990 opened up numerous new possibilities to reach our people with the gospel. We could not limit our ministry any longer only to the radio. Television soon replaced the radio as the most effective media reaching the Hungarian population. Preparing others to do what I was doing for twenty years became more important for me than preaching by myself. With the help of numerous influential Christian leaders in the United States, we established Hungarian Ministries Intl., our goal being to equip Hungarian Christians to fulfill their ministry.

Dennis - What have you been doing since you left TWR? Joseph - We soon established a small television studio and started broadcasting Christian news and monthly 30-50 minute TV programs in Hungary. But beside the electronic media, I had another interest as well, namely book publishing. In my country, basic Bible study tools such as a concordance or a Study Bible were missing, so these challenging undertakings became the priority for me in the following years.

Dennis - How has God blessed? Joseph - After several years of hard work we were able to publish the first and only Exhaustive Concordance to the Hungarian Bible and later on the Hungarian edition of the NIV Study Bible. We also established an organization in Hungary, called Protestant Media Foundation, uniting the different Protestant denominations in the use of the electronic media, and in the last years we held two major symposiums in Budapest. It was my privilege to invite some of my former TWR colleges from the States and from Germany to be speakers at these occasions. Our television programs are broadcast via 50 local and regional stations all over the country.

Dennis - Recently your wife passed away, can you tell us a little about her life and legacy? Joseph - I see Maria’s legacy reflected in my two daughters. I find great joy in watching them develop and carry on her creativity, hospitality, and dedication to the ministry.

Dennis - What projects are you working on now? Joseph - There are basically two new projects that we are currently involved with, one is the revision of the Hungarian Karoli Bible, and the other is the continued development in our television ministry. The revision of the Hungarian Karoli Bible is long overdue, as the text is even more archaic than the Standard King James Bible. The revision has four phases to go through in order to be ready for publication. We are currently in the second phase, comparing six previous revisions in order to combine and update the best of all versions. Nationally recognized theologians and linguists will be involved in the final two phases to ensure that the Bible text is stylistically and linguistically accurate.

One of the most prominent acknowledgements came from Dr. Ete Almos Sipos, the General Secretary of the Hungarian Bible Union. This is what he wrote:

Joseph Baranyi, adhering to the characteristically high standards we have come to expect of him, has along with the assistance of his distinguished team, completed a modern translation of the archaic 1908 Karoli Bible. They succeeded in maintaining the original “Karoli flavor,” while avoiding the myriad pitfalls of modernizing a text. Durably and elegantly bound, this volume provides the vast camp of Hungarian Bible readers with an easily readable, understandable New Testament. To them be granted our deepest thanks! I lovingly recommend this to any Bible-loving individual!

The revision of the Karoli Bible

Article in the American-Hungarian Reformed Periodical

Hungary, the 16th century, era of the Turkish invasion. This was the time when Gaspar Karoli appeared on the scene; only a few decades after the Mohacs Disaster, the tragedy of the nation. Hungary ceased to be the country it once was. Confusion, helplessness and hopelessness conquered the people, from great to small, poor to rich. Gaspar Karoli’s answer to the most pressing need of his time: the birth of the Bible of Vizsoly in 1590, published after three years of strenuous work. So begins the sweeping conquest of souls through the Holy Scripture in the Hungarian language.

Why do we need a newly revised Karoli?

Every generation is faced with the challenge of finding the best way to harmonize the present and still preserve the values and traditions of the past, particularly in light of the pressure politics can exercise upon cultural expression. In our age of globalism, this process is even more critical. The responsibility of our generation is to rescue most precious treasures of the Hungarian past: this includes the preservation of the Karoli Bible for future generations. I believe that with a newly revised Karoli, we can still uphold the influence of the Karoli Bible upon the nation, but twenty years from now it would be too late. Today, it is still read by multitudes; twenty years from now it will only be read by an insignificant minority. If the language of the “old Karoli” were more up-to-date, then its readability and influence on the nation would remain the same. We are revising the Bible not for the sake of Karoli’s name, but for the sake of keeping alive the influence it has had on the nation for generations. Nowadays, one of the most important responsibilities of those who are forced into minority is to preserve and proclaim traditional values. And along this line, it is exceptionally important to pass on the inherited revelation of God, the Holy Scripture, in a clear and generally understandable, but still in authentic form. The original message must come through in its original strength and power to address the people of every generation, including our own. The Bible of Vizsoly, and multiple revisions of the Karoli text in the centuries to follow, was able fulfill this task, but the most recent 1908-revised text is more than ripe to a new revision. In this process, however, I believe it is important to maintain the “Karoli character,” to the detriment of modernization. Thus, the Karoli Bible, considered a national treasure, can stay in character with its cultural heritage and avoid competition with the New Protestant Bible, which is defined by its modern language.

Commissioned by the Protestant Media Foundation, which was established in 1996, the revision work of the Karoli Bible is underway, with the participation of Reformed, Lutheran and Baptist theologians, linguists and literary scholars. The New Testament is ready for print; the printing of the complete Bible will follow in a year. We believe that even today the Bible has the answer to the most pressing need of our age. 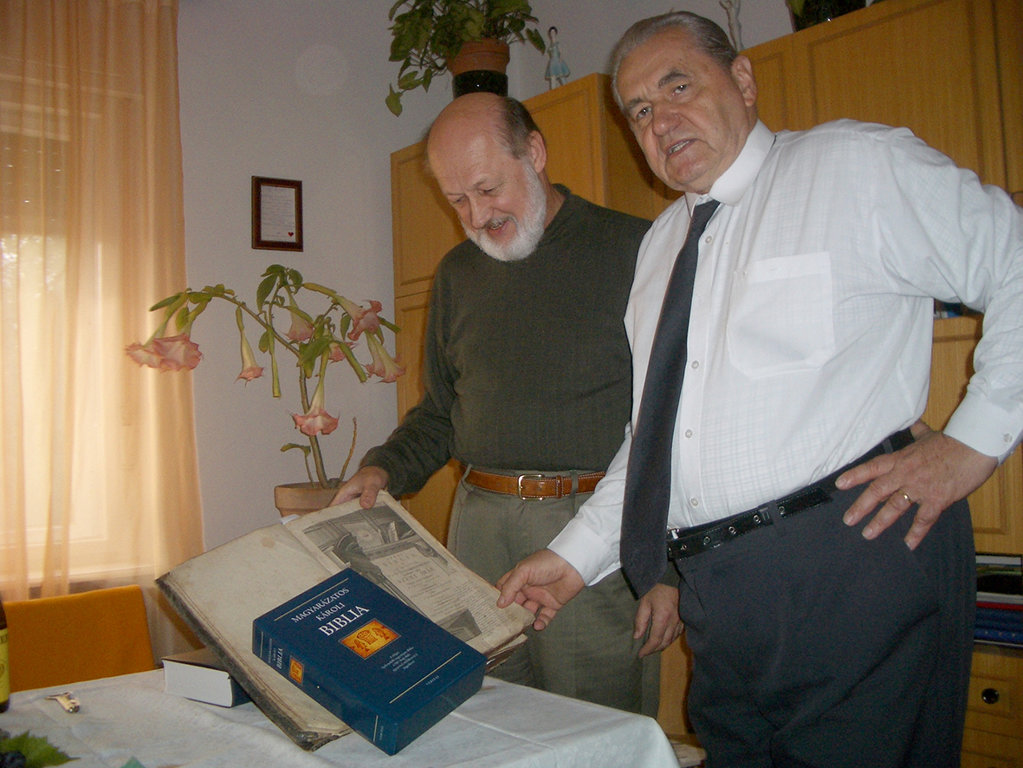 Joseph Baranyi and Prof. Ferenc Szilagyi with the Karoli Bible

“This (HMI) is a very unique ministry. Joseph Baranyi was able to raise the interest of many American churches and individuals toward the spiritual needs of the Hungarian people like no one else has done in the history of our nation. This is a tremendous accomplishment that we take as a special blessing from God. The 19th century Scottish Mission in Hungary comes to my mind when I see HMI’s activities among Hungarian speaking people [In explanation, the Scottish Mission spurred on a wave of revivals and spiritual growth, being particularly significant in that foreign missionaries had such an impact on the Hungarian nation]. The Scottish Mission created at that time tremendous blessings, revivals with long standing effects. Another more recent example to which I can compare Joseph’s work is when in 1990 the Communist regimes fell in Eastern Europe, including Transylvania, and the German and Holland Christians poured their gifts and donations to the needy churches in Transylvania. HMI is channeling immeasurable spiritual blessings from the American Christians to the Hungarian people... HMI’s activity is very much needed in Hungary, because no one else is doing what you are doing there. There are many deficiencies in our native land and you found those gaps, probably the most important ones, to fill it up... As far as the future is concerned, I would say, just continue your work the same way as you did before.”